From Financial Capital To COVID-19 Capital: What Went Wrong In Mumbai

Navi Mumbai: With a flimsy mask, rubber gloves and a bottle of hand sanitiser, Nikhil*, 40, a healthcare worker with Mumbai’s Brihanmumbai Municipal Corporation (BMC), was sent into a city slum in April 2020 to look for signs of fever among residents and check on the elderly. Soon, from an eight-hour shift, Nikhil was working for 12 hours straight. Somewhere along the way, he contracted SARS-CoV-2--the virus that causes COVID-19--unknowingly passed it on to two members of his family, and is now recovering in one of the city’s makeshift COVID-19 centres.

Nikhil said he was refused a COVID-19 test until he asked his bosses to intervene. To get a bed for himself and his family, he had to do the same. He alleged that when his test results came back positive, no ambulance was provided to him or his family to take them to a COVID-19 centre. He is now housed at a government facility with several other healthcare workers from Mumbai’s health department who have tested positive, he said, speaking to IndiaSpend over the phone, requesting anonymity.

Nikhil’s case illustrates some of the missteps that made Mumbai, India’s financial capital, the worst-hit city--with XX% of India’s COVID-19 cases. The government was late in starting surveillance in slum clusters and when it did, it put healthcare workers like Nikhil, without adequate protective equipment, at risk. Testing criteria were often changed to restrict testing, especially for asymptomatic patients, while the public health system that was already struggling with a high patient load before COVID-19 became quickly overwhelmed.

In the midst of these challenges, top officials were moved around--the city commissioner of BMC was replaced and the city got two new additional municipal commissioners. No reason was given.

As the lockdown eases further from today, the city’s COVID-19 centres (including private ones) are either out of beds and intensive care units for serious cases or do not have healthcare staff. The private sector is beset by allegations of overcharging, of turning away poor patients and of leaving those with other diseases to fend for themselves.

Mumbai has the most COVID-19 cases of any city or state other than Maharashtra. Of Maharashtra’s 85,975 cases, 57% are in Mumbai. Here’s a look at how things went so wrong in India’s second richest city after Delhi.

In Mumbai, India’s smallest district by area, 365 people live on every sq km of land, according to the 2011 census. An estimated 42% of the households live in the city’s slums concentrated largely in the central part of the city.

The civic government asked healthcare workers, such as Nikhil, to survey the city’s dense slum areas too late, said Subhash Salunkhe, epidemiologist and technical advisor to the government of Maharashtra. Sending healthcare workers in the pockets that have now turned into hotspots could have been a mistake, admitted Salunkhe.

On April 9, 2020, the World Health Organization (WHO), which depends on national government data, put India in the group of countries with community transmission of COVID-19--cases in which the source of primary infection in a community is unknown--but India’s apex medical research body, the Indian Council of Medical Research, has not admitted so far that there is community spread in the country.

But cases like those of Nikhil back the theory of community transmission. “I don’t know when I got infected and by whom,” Nikhil told IndiaSpend.

From June 3, 2020, the state government allowed shops to open, self-employed individuals like plumbers and electricians to resume work and residents to go outdoors for physical activity like walking and jogging. This even as cases surged and the city’s health system was overwhelmed. Doctors worry that this would mean a surge of patients as residents throng parks, gardens and beach fronts.

As the lockdown eases, doctors are highlighting a key trend: COVID-19 patients are coming from across the city and not just containment zones that have been identified as areas with case clusters.

“All the pregnant women who are coming are either mildly symptomatic or asymptomatic,” said Aparna Hegde, associate professor at the government-run Cama and Albless Hospital for women and children in Mumbai and founder of the NGO Armaan that works with the government to improve maternal health. “And they are coming from all over the city and not just the containment zones--which means the spread in the community is obviously there.”

Meanwhile residents, such as Nikhil, whose boss had to intervene for Nikhil’s COVID-19 test, are finding it difficult to get tested in the public sector.

Cases in Mumbai increased even as the city stopped testing asymptomatic contacts of confirmed COVID-19 cases on April 12, 2020. This meant that potentially infected individuals without symptoms or with mild symptoms continued to spread the infection further. The city’s testing criteria have changed several times and it is currently testing asymptomatic contacts of confirmed cases.

Overall, Maharashtra had tested only 2.3 contacts per positive case between January 30 and April 30, 2020, lower than the India average of six. Karnataka tested 47.4 contacts per patient, as IndiaSpend reported on June 2, 2020.

Salunkhe said he did not believe not testing asymptomatic contacts contributed to the rise in cases, but it was people who were not heeding to public health messages and lockdown rules because of whom cases had surged.

A lockdown, especially in a densely populated city such as Mumbai, does not mean COVID-19 cases will not spread; it merely means that the rate of spread will slow down to give health systems a chance to prepare, as IndiaSpend reported earlier.

In Mumbai, “cases will go up for another two to three weeks before the curve begins to flatten”, said Salunkhe, consultant to the Maharashtra government. “I don’t think we need to be bothered about the number of cases. I will be more keenly observing the number of people who are getting in either critical or semi-critical condition.”

“Most COVID-19 patients are asymptomatic or only have mild symptoms,” said Hedge. “Then there are 5-6% who will require oxygen support or ICU care. We do not have the facilities to handle even this 6% and this is the result of chronic underfunding in the public health system,” she said.

“Even in the best of times these hospitals are handling patient loads four times their capacity,” said Hegde. She is referring to Mumbai’s four major public hospitals--BYL Nair, Lokmanya Tilak Municipal General Hospital (Sion), Sir JJ Group of Hospitals and King Edward Memorial Hospital--that patients from across Maharashtra come to for specialised care.

Initially, the government admitted all patients to hospitals, even those who had mild symptoms and could have recovered with home isolation, Girdhar Gyani, director general of the Association of Healthcare Providers of India, told IndiaSpend in a recent interview. He added that it wasn’t the right step as it filled hospital beds.

Further, if a patient is in intensive care or on a ventilator, the average time to recovery is long, 10-12 days or longer, leading to a shortage of these facilities for serious patients, doctors from two private hospitals told IndiaSpend in an interview published on June 5, 2020.

With the public sector overwhelmed, the Maharashtra government decided to take over 80% of operational beds in private hospitals for COVID and non-COVID treatment. Costs of beds and surgeries have been capped for these beds.

“It is so unfortunate that the government has to come down legally on the private sector,” said Salunkhe. In a “critical situation” the private sector increased their prices or in some cases shut down their hospitals. They are better equipped than government institutions with ventilators and trained manpower, he said.

Across the country, more than half (61%) of those who need hospitalisation in urban areas turn to the largely unregulated private sector, according to the 2019 report ‘Key indicators of Social Consumption - Health’. 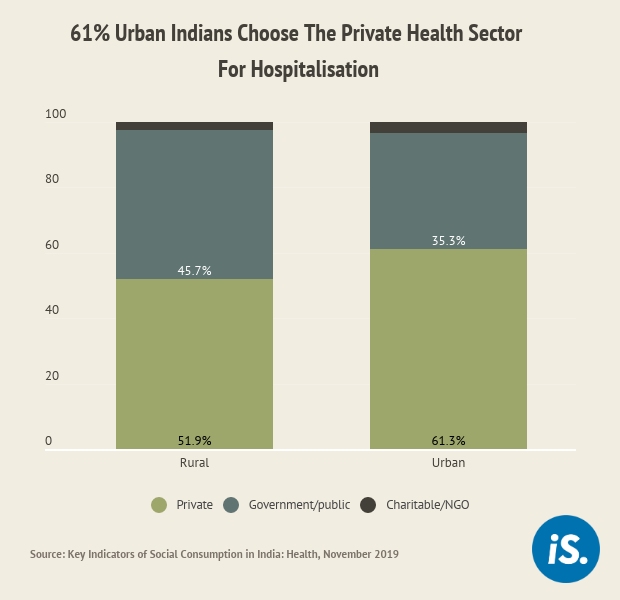 “Roughly, we have around 25,000 beds in the private sector [in Mumbai]. That means, at least 20,000 beds will now be at the disposal of the government,” said Gyani.

In the days to come, Salunkhe believes it will be important to put systems, such as an app that would allow patients to know where the beds are available, in place. “You have to ensure that very critical patients reach hospitals in time,” he said.

In the last week of May 2020, Sadhana Dhandore, 44, received a call from her brother who lives in a slum in Mumbai’s Santacruz area. Their mother was suffering from high fever and diarrhoea, a pattern every summer because of the repressive heat that makes their home in the slum unbearable.

When Dhandore called Nanavati hospital, a multi-speciality private hospital, she was told there were no beds available. “If I was willing to pay Rs 1.5 lakh then I could get my mother a bed, they informed me,” she said.

IndiaSpend has reached out to the corporate communications team of Nanavati hospital for a comment. The story will be updated if and when they respond.

The COVID-19 pandemic has disrupted prevention and treatment services for noncommunicable diseases (NCDs) across the world, showed a three-week-long survey of 155 countries by the WHO.

More than 53% of the countries surveyed have had services for hypertension partially impacted, 49% for treatment for diabetes and related complications, 42% for cancer treatment and 31% for cardiovascular emergencies, the survey found. NCDs kill nearly 41 million people each year and make up 71% of all global deaths. Of these, more than 85% deaths occur in low- and middle-income countries such as India.

“It’s vital that countries find innovative ways to ensure that essential services for NCDs continue, even as they fight COVID-19,” said Tedros Adhanom Ghebreyesus, director-general of the WHO. In India, an estimated 585,000 elective surgeries have already been put off due to COVID-19 and initial data suggest that it will also impact nutrition of adolescent girls, as IndiaSpend reported on June 1, 2020.

The lockdown had interfered with India’s National Health Mission, reducing measles, mumps and rubella vaccination, as well as interfering with institutional deliveries as most poor people depend on public transport to reach healthcare facilities, according to an article published in the scientific journal The Lancet in May 2020.

For Mumbai, this meant that others like Dhandore’s mother never received the healthcare they needed in time.

Dhandore’s mother was eventually admitted to a local nursing home that asked her to leave after three days of treatment. “They told us they were worried she might have COVID-19 and would then have to shut down their hospital,” said Dhandore. The nursing home refused to conduct a COVID-19 test. Eventually, the 61-year-old was tested at another private clinic. A few hours later she passed away at home, a day before the COVID-19 test came back negative.

(Shetty is an IndiaSpend reporting fellow.)